THE MURDER OF BISHOP STANISLAUS

THE MURDER OF BISHOP STANISLAUS 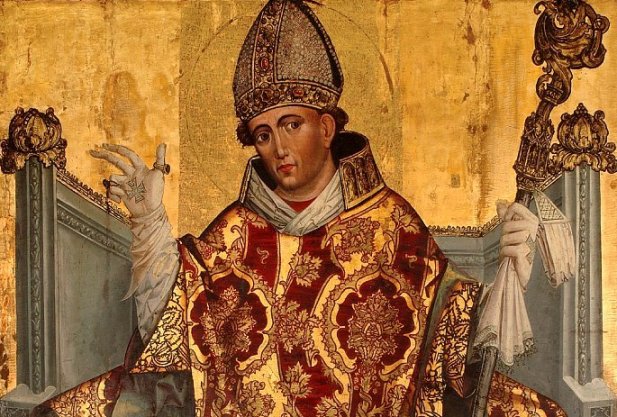 The Polish priest Stanislav (Stanislaus), having become the bishop of Krakow, included the village of Petravin on the right bank of the Vistula into the property of his diocese, which led to protests by the heirs of the deceased owner, from whom this village was allegedly bought, and to a lawsuit. But with such a trump card as the bishop’s, the heirs could not compete. Stanislav resurrected a nobleman who had died three years earlier, he personally appeared at the trial and confirmed the immaculacy of the deed of sale. The village remained with the bishop. 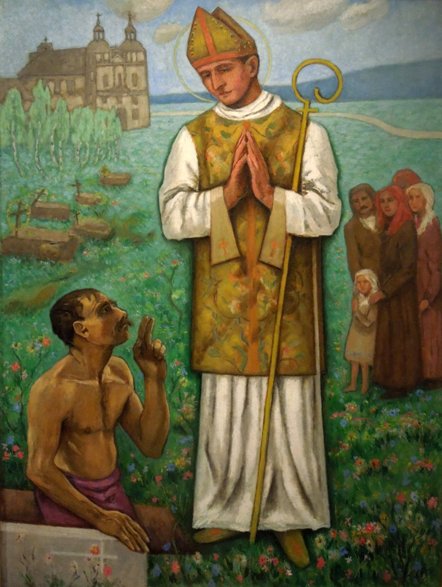 However, according to another version, the conflict over the village near Lublin at Stanislav arose not with the heirs of its deceased owner named Peter, but with the king of Poland Boleslav II, nicknamed «The Bold», who ruled it for the applicants. And Boleslav did not want to give this village, neither to Peter’s relatives, nor to Stanislav. And then the bishop dug up Peter’s grave and, with many witnesses, Stanislav told Him to get up, which the deceased did. 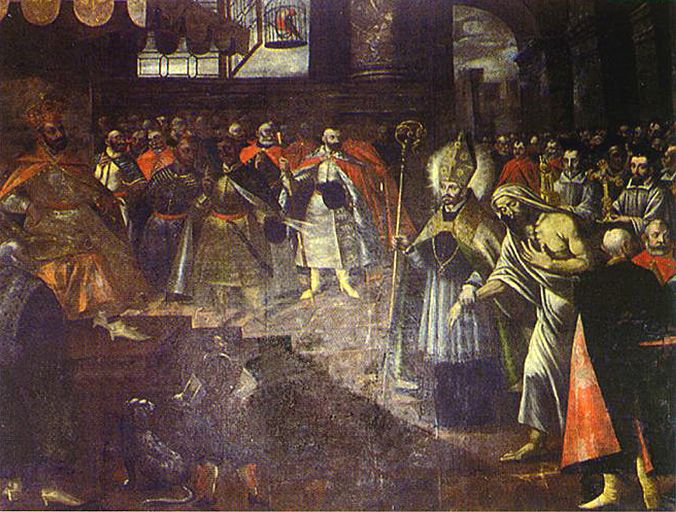 Then the resurrected Peter was decently dressed in a cloak because his clothes had fallen into disrepair in the ground, and brought to King Boleslav to testify on behalf of Stanislav. It is clear that when he appeared, everyone present was stunned. Peter first of all reprimanded his three sons, who were speechless, and then confirmed to the court that Stanislav really paid for his land. The king had no choice but to give the village to the bishop. Then Stanislav asked Peter if he would live in the white world again, but he said that he had had enough of the old hassle. After that, he was buried again.

Some time later, the bishop of Krakow again had a conflict with the King of Poland Boleslav II. There are at least two versions about the causes of the conflict. According to the first, Boleslav raped a young noblewoman, and all the bishops, including the primate of Poland, remained silent. Only Bishop Stanislav of Krakow, who imposed excommunication on the king, did not remain silent. 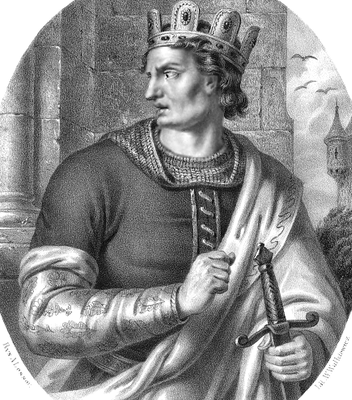 According to another, more plausible version, while Boleslav participated in foreign military campaigns, robbery, robbery, fornication and adultery spread everywhere in his country. Some of the royal vassals began to desert from his army. They began to return to their homeland without permission, taking care of the fate of their ancestral possessions and families. When the king himself returned to Poland, he began to take cruel revenge on the nobles who had left him. Wives who tainted themselves with adultery also got it. In particular, the king allegedly ordered the killing of all illegitimate babies, and told their mothers to breastfeed puppies. 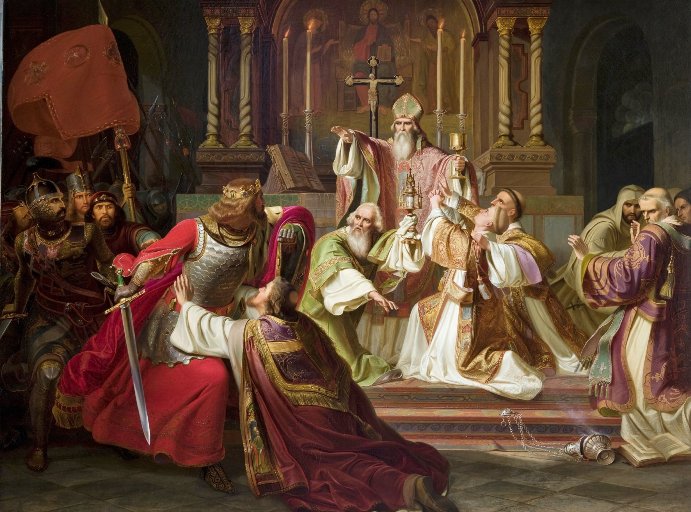 A painting by Juliusz Knoor. «Stanislav excommunicates the king from the church.» (1840)

Stanislav tried to reason with the king and soften his anger, but he failed. And then the ambitious bishop took and anathematized the monarch. However, the king did not tolerate such audacity and in response accused Bishop Stanislaus of treason, and the royal court found him guilty. 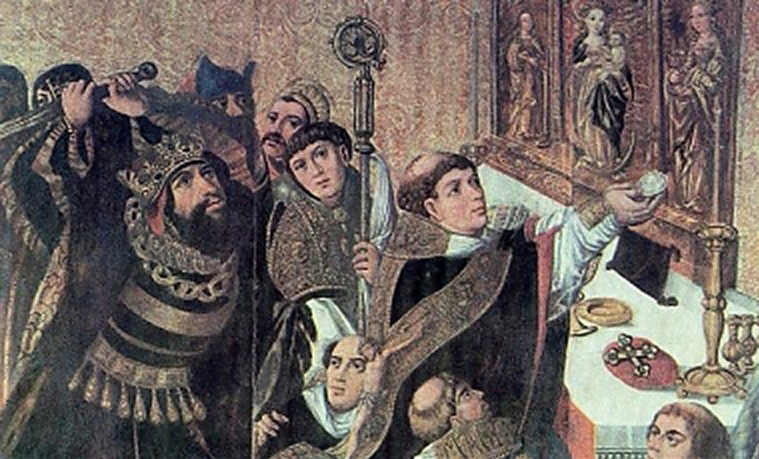 It is said that King Boleslav sent his men to arrest Stanislaus for subsequent execution by court verdict, but they did not dare to touch the bishop. According to the principle that «if you want to do a good job, then do it yourself,» Boleslav went personally to deal with the obstinate priest. 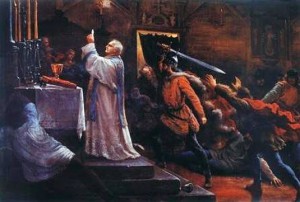 On April 11, 1079, with his vigilantes, he broke into the church of St. Michael right during mass and personally killed the bishop with a sword blow to the head, after which he ordered the soldiers to cut his body into pieces. However, there is another version that the murder took place in the Wawel Castle. But practically no one disputes the miracle that happened after that. 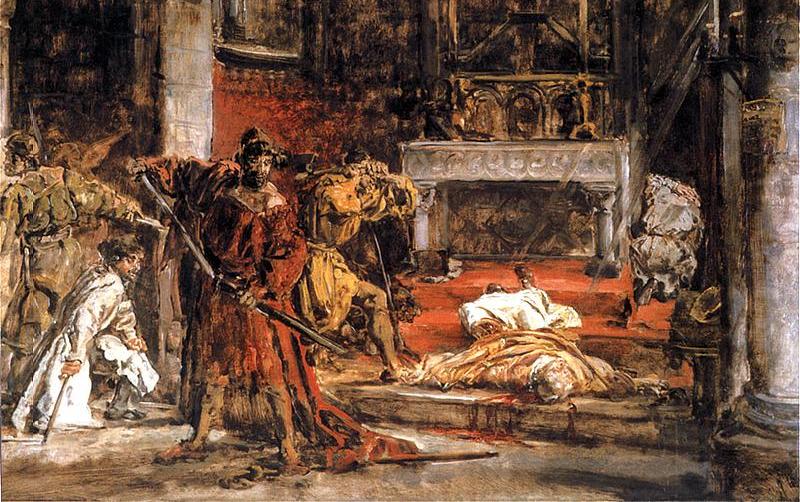 Painting by Jan Matejko. «The murder of Bishop Stanislaus.»

According to legend, Boleslav’s vigilantes dismembered the bishop and scattered parts of his body to be eaten by wild animals. But its members miraculously reunited, and the eagles appeared from nowhere and began to guard the body until it was awarded a funeral befitting the rank of a martyr.

The general popular indignation at the murder of the bishop forced King Boleslav to flee the country. He found refuge in Hungary. But there he insulted King Vladislav by not getting down from his horse when everyone was greeting him. Because of this, a legend arose that the Hungarians poisoned Boleslav in 1081 or 1082. 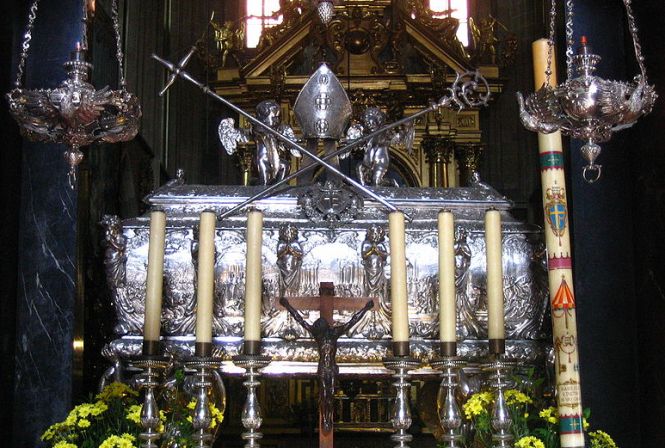 The sarcophagus of St. Stanislaus in the Wawel Chapel

And Stanislav was later canonized and became the patron saint of Poland. He is the first saint of Polish origin.

In 1963, Polish scientists exhumed a particle of the relics of St. Stanislaus from a shrine stored in the Cathedral in Wawel. According to the results of the study, the bishop died from seven sword strikes inflicted from behind. 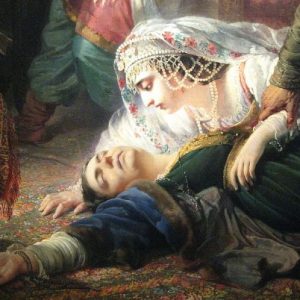 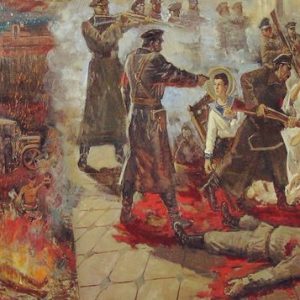 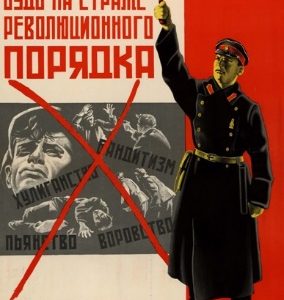 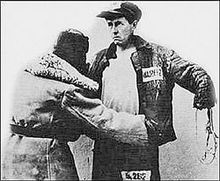